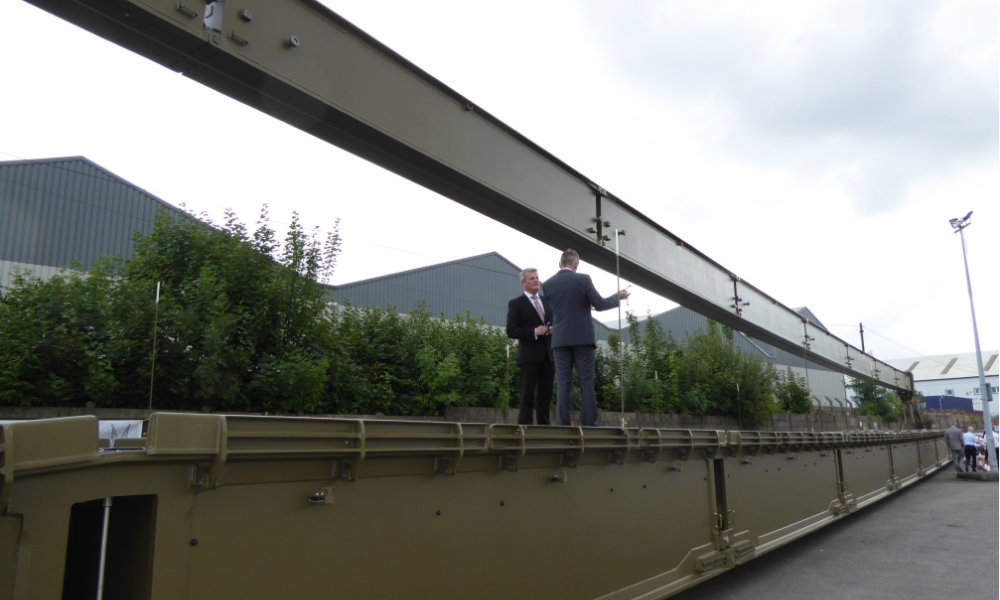 UK Defence Minister Stuart Andrew today visited WFEL to mark the completion of a multi-million-pound contract to supply the Australian Army with vital logistics equipment. The Defence Minister described WFEL, which has benefited from £600m-worth of export orders, as ‘a model for how companies across the UK can thrive on the global stage’. The Minister was accompanied by the Head of Australian Defence Staff London, Air Commodore Brian Edwards and both were given a demonstration of the complete build and launch of a DSB Dry Support Bridge, which can be deployed in under 90 minutes by a team of only 8 personnel and can support an MLC of 120 whilst spanning a 46 metre gap.

The bridges will be used in combat situations providing rapidly deployable temporary infrastructure ensuring vital equipment and soldiers can navigate their way through the most challenging terrain. The military bridges can also be used in times of crisis during natural disasters maintaining essential lifelines to those who need it the most.

“WFEL is leading the way across the world when it comes to making military bridges which help troops defeat our enemies and provide essential aid to people in disaster zones. Not only does this company bring hundreds of jobs and millions of pounds of investment to the UK, but it helps flourish relations with some of our closest allies. As they finish an order for Australia, kick off another order for America and look towards more opportunities to build British bridges, they are a model for how companies across the country can thrive on the global stage and play a key role in the defence of our nation.”

Work continues at WFEL following the completion of this Australian order as the company turns its focus to new orders for the US Army, building upon the 116 military bridges that the company has already built for US forces.

WFEL’s contribution to UK defence can be traced back as far as 1915. The company has been designing and producing bridges for the UK military since the 1970s and the relationship remains to this day - the British Army has over 50 sets in service. They have been proven in the field in Iraq and Afghanistan. There are also potential UK opportunities in the pipeline for WFEL, with the company currently bidding to update and replace some of the MOD’s military bridging systems and it could become part of the Mechanised Infantry Vehicle (MIV) programme's supply chain, which would support the current 227-strong local workforce.

“As the leading tactical military bridge maker globally, WFEL continues to work to provide solutions for customers like the Australian Defence Force. Our long-standing relationship with the ADF first began over 30 years ago, when they chose our Medium Girder Bridges. We have been delighted to continue to support them again today, not only with the supply of further MGBs but also with a significant capability enhancement with the latest mechanised Dry Support Bridges.

“The adoption of the DSB not only provides the ADF’s Manoeuvre Commanders with the ability to cross significant wet or dry gaps quickly and efficiently, it allows a level of inter-operability with an ever-growing user base. We have worked collaboratively with the Commonwealth’s Managing Contractor to reduce risk for this contract and are pleased to be providing an off-the-shelf solution to the ADF’s wide-gap tactical bridging requirements.”

“The Australian-UK bilateral defence relationship has been forged over many years and is incredibly strong and enduring. In recent times, we have seen an increased emphasis in opportunities for collaboration from a defence industry standpoint. This project introduces into service the latest addition to the Australian Army’s suite of combat bridging. It will ensure that the Australian Defence Force has an enhanced gap crossing capability which will enable land forces, both mounted and dismounted, to cross wet and dry gaps in support of operations.”