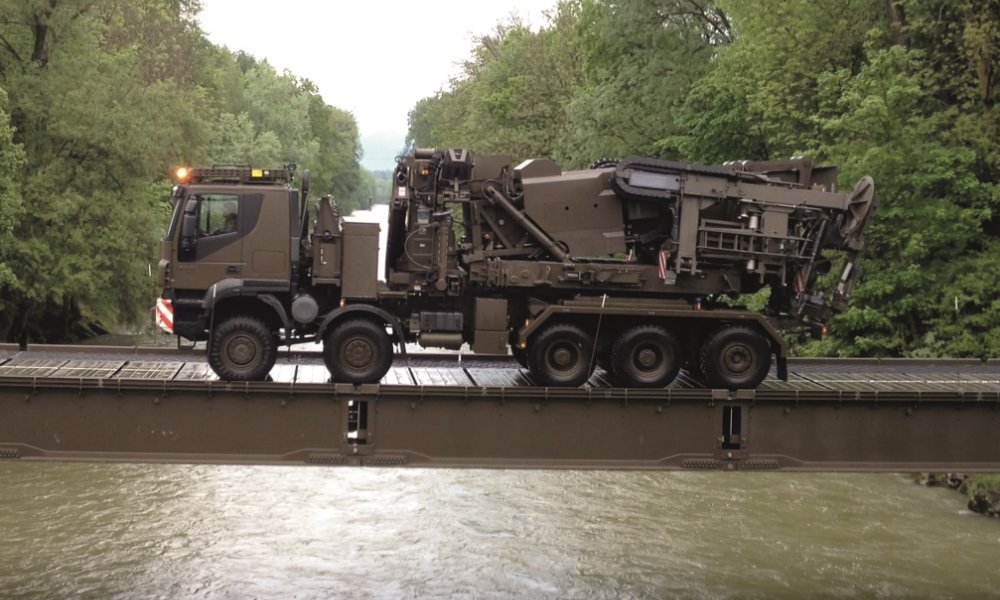 WFEL has been awarded an initial contract by the UK MoD to undertake an Assessment Phase Programme, as part of the review to sustain the Heavy Forces Close Support Bridge (CSB) and General Support Bridge (GSB) capability, currently being provided by the BR90 system, to support UK forces out to 2040.  A primary objective of this programme is to provide the Heavy Forces with an MLC 100 (Tracked) capability in order to support unrestricted crossing by UK Heavy Forces by 2022.

Under this two-year contract, WFEL - in conjunction with its parent company, KMW - will develop, determine and prove the capabilities of their mobile bridging systems against MoD user requirements.  In addition to the already-proven system capabilities, extensive stress and fatigue testing will be carried out, to verify the MLC ratings and life expectancy of the different bridge types and allowing WFEL to incorporate current bridge fatigue and future Bridge Fatigue Management Systems.

The currently-available, off-the-shelf bridging solutions offered by WFEL include the DSB Dry Support Bridge (which can be fully deployed by just eight people and a single launch vehicle in under 90 minutes) which will be offered for the GSB requirement and also KMW’s LEGUAN Bridge (whose fully-automatic, horizontal bridge-laying provides increased stealth with its low silhouette, during its five minute bridge launch), which will be adapted to be launched and recovered from the MoD’s already in-service Titan armoured bridge launchers, to meet the CSB requirement.

Under this two year contract WFEL - in conjunction with KMW - will demonstrate the capabilities of their mobile bridging systems against MoD user requirements, with particular emphasis on the systems’ load carrying capability and overall durability. Enhancements to their existing bridge fatigue monitoring system, which help to determine the condition of the bridges, will also be evaluated.

Ian Wilson, WFEL’s Managing Director, said, “Our Dry Support Bridge is one of the world’s most technically advanced, rapidly deployable military bridges of its type. Over 130 systems have already been sold and it is in use with the US, Swiss and Turkish armed forces, having also been used as temporary infrastructure in Iraq and Afghanistan. The bridge has been designed and proven for use in both Military and Disaster Relief situations by loads of up to 120 tonnes.

“The DSB launch vehicle is available on the user’s choice of chassis and its adoption by the Australian Defence Force this year onto Rheinmetall MAN Military Vehicles (RMMV) 10 x 10 fully-armoured chassis, further strengthens the DSB’s market dominance and enhances the system’s compatibility with the UK MOD’s current fleet of RMMV vehicles, including the HX77 variant, which is already capable of carrying WFEL’s bridge system without modification. This significant installed base of equipment, allied to a fully operational production line, ensures that our customers have a high level of confidence in continued through-life support and spares availability.”

Already adopted by 16 armed forces, the LEGUAN bridge system is outstanding in terms of modularity, interoperability and load-carrying capacity and is well suited to meet the UK’s CSB requirement. Beyond its core ability to launch a bridge under any condition within minutes, the LEGUAN system provides additional features to enhance its tactical value, including night vision systems, laser range finder, an auxiliary power unit and crew compartment cooling system.

The LEGUAN can be used in Military or Disaster Relief operations and, for both MLC80 and MLC100 bridge types at either 26m or 14m length, a life-cycle monitor system and a civilian-use kit (consisting of centre cover plates and hand rails) is available.

Ian Wilson continued: "With the large user base of both of these bridging systems, and a growing demand for each, we believe that we offer a near off-the-shelf, low-risk solution to the UK’s requirement, which will help to support the unrestricted movement of our Army and broaden its interoperability with other nations. This Assessment Programme allows the MoD to de-risk any future system procurement or upgrade route and to determine which bridging systems offer the most cost-effective solutions. We look forward to presenting our findings in due course."